A website of love emblems, a very popular genre based on word and image combinations for the youth in the Low Countries ca. 1600. It currently includes 27 Dutch love emblem books, religious as well as profane. For all of these we have full transcriptions, page facsimiles and indexes, as well as extended search options. Links to sources and parallels, translations and annotation are being added.

The Éditions lyonnaises de novels du XVIe siècle (1501-1600) database aims to highlight the contribution of Lyonnais presses to the development of the fiction genre in the XVIth century. Each notice lists and describes the editions printed in Lyon in the 16th century, while listing all the editions that have appeared elsewhere in France or in Europe.

The Routes of the Ancient Italian Book in Normandy database (RDLI) offers an inventory and description of the copies of editions of texts published in Italy from the beginnings of printing to 1600 kept in public and private funds in the west of France.

The Codex Mendoza was created under the orders of Viceroy Antonio de Mendoza to evoke an economic, political, and social panorama of the recently conquered lands. It was made in 1542 and since 1659 it has been in the collection of the Bodleian Library. This digital edition of the Codex Mendoza represents the first attempt to create a digital resource that permits in-depth study of a Mexican codex. 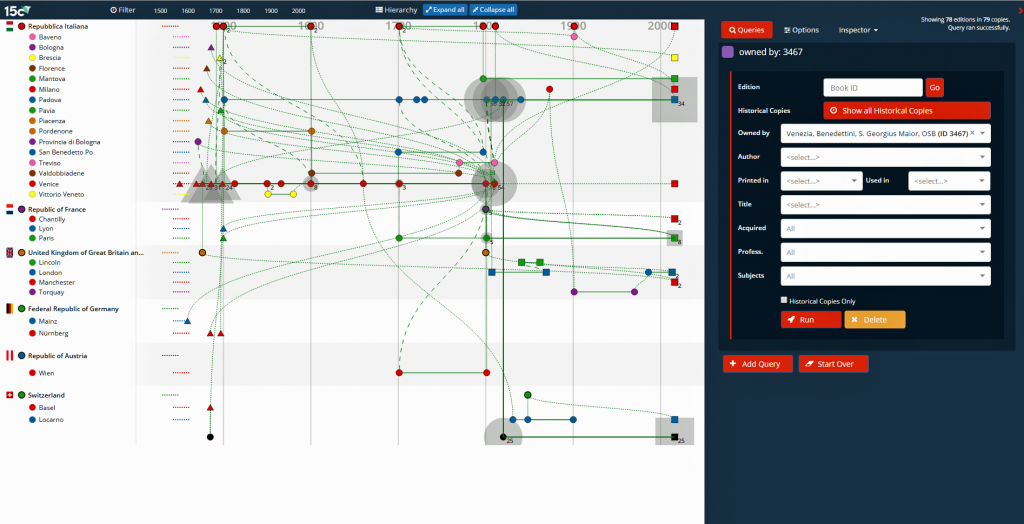 Books printed between 1450 (the year of Gutenberg’s invention of modern printing) and 1500 (conventional cut-off date in scholarship) are known as incunabula. Some 30,000 editions are known today, in some 450,000 surviving copies, located in about 4,000 different public libraries, mostly in Europe and North America. Each surviving copy has a different history, which can be reconstructed with the help of physical evidence (ownership inscriptions, decoration, binding, coats of arms, manuscript annotations, stamps, prices, etc.) and bibliographical evidence (historic library catalogues, bookseller and auction catalogues, acquisition registers, etc.): all this is known as copy-specific information, or provenance, or material evidence, or post-production evidence. The idea that underpins the 15cBOOKTRADE Project is to use material and documentary evidence to address several fundamental questions relating to the introduction of printing in the West which have so far eluded scholarship, partly because of lack of evidence, partly because of the lack of effective tools to deal with existing evidence.

Gallica is a full text searchable database of the Biliothèque numérique of the Bibliothèque nationale de France. The search interface is available in French, English, Spanish, and Portuguese.

A database of 186 lexical texts published or written in England from 1475 to 1702 that hold fully searchable 620,000 word-entries. LEME offers unique digitized access to dictionaries, glossaries, and other lexical texts in a host of languages, focusing on English but including major works in Latin, French, Italian, and Spanish. LEME is hosted by the University of Toronto Library and published (since 2006) by the University of Toronto Press. It grows annually.

A collection of important evidence for research on early modern women, this blog features posts with evidence of early modern female book ownership, including signatures and other marginalia.

Footprints traces the history and movement of Jewish books since the inception of print.

The history of the book is an important part of humanities scholarship. Especially as more books are digitized, scholars, librarians, collectors, and others have become increasingly attuned to the significance of individual books as objects with their own unique story. Jewish books in particular tell a fascinating story about the spread of knowledge and faith in a global Diaspora.

Every literary work represents a moment in time and space where an idea was conceived and documented. But the history of a book continues long after composition as it is bought, sold, shared, read, confiscated, stored, or even discarded. This history is the essence of Footprints.

THIS EXHIBITION presents Renaissance editions of Dante’s Divine Comedy from the John A. Zahm, C.S.C., Dante Collection at the University of Notre Dame, together with selected treasures from The Newberry Library. The Zahm collection ranks among the top Dante collections in North America. Purchased for the most part by Zahm in 1902 from the Italian Dantophile Giulio Acquaticci, the 15th- and 16th- century imprints presented here form the heart of Zahm’s collection, which totals nearly 3,000 volumes, including rare editions and critical studies from the Renaissance to the present. The nine incunable editions and nearly complete series of 16th-century imprints featured in this exhibit constitute essential primary sources for both the history of Dante’s reception during the Renaissance and the early history of the printed book.