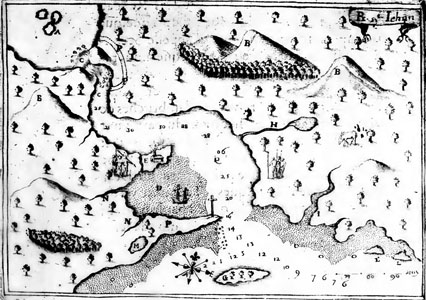 A collection of educational resources based on the biographies of the explorers Jacques Cartier and Samuel de Champlain in the Dictionary of Canadian Biography/Dictionnaire biographique du Canada. All resources are available in both English and French.

This resource offers approaches to teaching Marguerite de Roberval, a young French woman who survived being marooned on a perilous island in the Gulf of Saint Lawrence during the sixteenth century. She was the inspiration for three published works in Renaissance France and numerous other accounts since then.

Digiberichte.de aims to advance research on late medieval and early modern European travel accounts. This project provides digitized editions and research literature on approx. 375 different travels and pilgrimages through Europe in historical times. The bibliographical database allows quick reference for the travel accounts. Due to copy right restrictions only literature from the 19th century and earlier is provided in full text.

The majority of the material provided here is based on the so called “analytical bibliographies” of medieval travel accounts that have been edited under the direction of Prof. Werner Paravicini and published by Peter Lang. Initially only bibliographies on German, French and Dutch travel-accounts have been published, but there was always the idea of collecting material for the other European countries (especially Italy, England, Spain, Portugal, Scandinavia and East-Europe) as well. Digiberichte.de therefore collects information also for travelers from these countries that left accounts of their journey.

Digital Collections for the Classroom: Maps and the Beginnings of Colonial North America

Website presenting maps of North America from the 16th to 19th centuries, including primary-source documents from the Newberry Library collection.

This project provides digitized editions and research literature on approx. 375 different travels and pilgrimages through Europe in historical times. The bibliographical database allows quick reference for the travel accounts.

A database of 38,000+ links to freely accessible electronic texts and digitized photographic reproductions of Neo-Latin works, dating from late fifteenth century to present, organized by author/commentator and title. Searchable